This is the only place on earth bluebonnets grow... once a year they come and go. (Nanci Griffith)

I've always loved the bluebonnets. No, I'm not a native Texan, but I've got Texan blood. :) As a child, I spent many spring breaks visiting relatives in Texas, and I always loved seeing the fields of blue, and I loved taking the typical pictures in them.

Once I moved to Texas for college, I loved walking through the bluebonnets, and I was also getting very into photography and took a lot of photos. 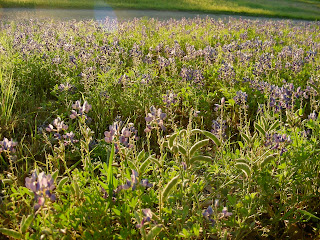 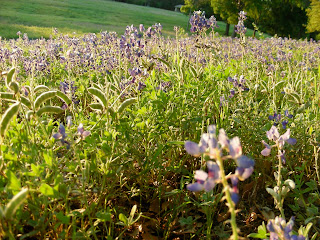 Last year we took pictures in the bluebonnets again. 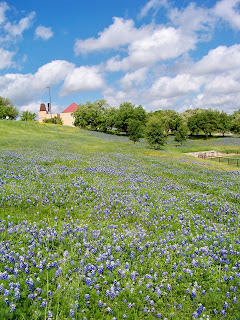 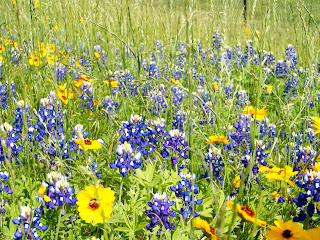 I also grew up in love with "The Legend of the Bluebonnet" by Tomie dePaola. The legend is of a Comanche girl, She-Who-Is-Alone, because all of her family had died. The tribe was suffering greatly from a drought. She-Who-Is-Alone had one dear possession, a doll that her grandmother had made her, all she had left of her family. In the night, she realized she had to make the sacrifice so the rains would come, and she burned her doll and offered the ashes to the four winds and the Great Spirits. The next morning, blue flowers covered the land, the same color blue as the feathers her doll had worn. She became known as She-Who-Dearly-Loves-Her-People. 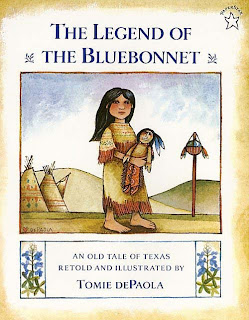 I even had my own She-Who-Is-Alone doll, complete with her doll :) I loved that story. And I love the bluebonnets. One of my favorite times of year. 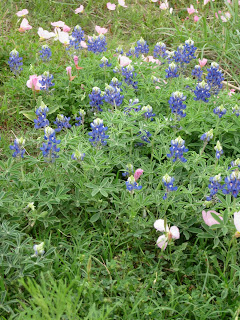 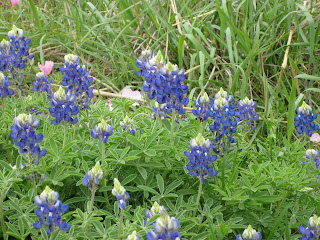 The spring is a chance for renewal and new beginnings. Bluebonnets always remind me.
Posted by Naomi at 10:41 AM No comments:

I participated in the Relay for Life Friday night/Saturday morning. The last time I participated, I was a senior in high school. One of my best friends came to me with the idea of starting a team for Relay in honor of her grandmother who passed away last year. Victoria was raised my her mom and grandmother, so it was even more difficult than for some to deal with her passing. It had been her third battle with cancer, and she had decided to refuse treatment. I will forever remember her strength in coming to that decision, because I know it could not have been easy.

We have all lost someone to cancer these days, and for me the people closest to me that died from cancer were my godmother and one of my best friends. Ironically, my best friend was there when I found out my godmother died. Then two years later, it was her.

I should also mention that there have been many people in my family and friends that have also battled cancer and survived, and it is an incredible blessing. It is for them that I relay as well.

When I planned for Relay this year, I decided to pursue the lofty goal of raising $500. I made it to $385, thanks to my beloved community around me, that chose to support me in my relay, and the American Cancer Society in fighting against cancer.

My friend Madi was born in April, and died in April, two weeks after she turned 15. The eerie thing about Relay this year is that it took place right after Madi's birthday, which was April 14. It was both weird and fitting to be able to celebrate her life in this way, so close to her birthday. This is us the last day I saw her:


My page where I raised money for Relay included my story:

My Reason to Relay

I am participating in the American Cancer Society Relay For Life because I want to make a meaningful difference in the fight against cancer.

Almost everyone has been touched by cancer, either through their own personal battle or through someone they love.

The summer I turned twelve, I met two of the best friends I've ever had, Sarah and Madi. We met at the summer conference for the Baptist Peace Fellowship of North America and became fast friends because we were all close in age. We were also all dancers and shared a love for art. Though we only saw each other a week a year, we remained close, emailing and writing letters every now and then.

Two years later, the summer I turned 14, we were still close, yet something was different. The C word. Madi had cancer. She was recovering from surgery that year and wasn't able to be as active, including no dancing, which we could tell was hard on her. Yet still she was happy and fun to be around.

Over the next nine months, we went from hopefulness to despair. We thought the cancer was treatable, but then treatments kept not working and more tumors forming. Every time we talked, it seemed like more bad news. I could hear the fear in her voice, yet she still had hope, she still had faith, she was still optimistic. I wonder had the roles been reversed if I would have ever had the kind of strength she showed all of us.

Come the beginning of 2004, in the first months, her decline continued. Her community wanted to give her a few months comfortably at home, but Madi departed this life on April 28, 2004, two weeks after her fifteenth birthday.

She was an amazing person and an incredible friend, one that I still think of every day. Her death had deep effects on me in many ways. It taught me to be ever thankful for all the blessings I have in my life. Her life taught me more--to be ever present in the world, to dance as much as possible, to always keep my head up despite the struggles and to spend as much time as possible with the people I love.

Her life was short, but it was full. I live my life in honor for her, and this is why I fight against cancer.

Another one of my dearest friends that I met when I was 18, Victoria, has brought me to the Relay for Life this year. She was raised by her mother and her grandmother. Her grandmother had cancer three times, and died during the third battle about a year ago. Our team, La Raza Unida, is in her honor.

Every day, the American Cancer Society is helping us stay well by preventing cancer or finding it at its earliest, most treatable stages. They assist families in finding the best resources to help their friend or loved one deal with a diagnosis and their journey to get well. The American Cancer Society is also rallying communities (like ours!) through events like Relay For Life, to fight back and find cures for this disease.

Please join my team or make a donation to help the American Cancer Society create a world with less cancer and more birthdays. Together, we can help make sure that cancer never steals another year of anyone's life!

The St. Ed's Relay for Life was part of Colleges Against Cancer and took place 7pm Friday to 7am Friday. I currently work nights, so only managed to go to the second half. I met Victoria and her boyfriend Diego and I would say we probably spent about 4 hours total just walking. It was a little chilly, so it also helped us stay warm. We spent time telling stories of Victoria's grandmother, and my Madi. I kept a notebook of letters I wrote Madi the years after she died, and I read them to remember. I wrote in my journal. We played with Victoria and Diego's dog Emma. We relayed.

It was a beautiful night and a beautiful experience. I love that we spent that time honoring Victoria's grandmother and my Madi, and all others who have battled cancer.


The bandana I'm wearing is one that Madi, Sarah and I all got the first summer we met, and became a sort of friendship bandana... which is silly, but we always brought them to Peace Camp, and Sarah and I still do :)

I miss my one and only madi, but I am always glad to honor and share her story, because she is still one of the strongest women I've ever known, and I aspire to live out the same strength.
Posted by Naomi at 12:46 PM No comments:

Hello! This is my new blog. I've had a livejournal since I was 15... and yes I still have one though lj really seems to be dying out. It is for this reason I am moving to blogger so maybe people will actually read my blog. I am also at a transitional part of my life right now--I graduated from college in December and am figuring out what direction my life may take me right now. And I am not super sure what this blog will be about, but I can promise that it will be less whining than my livejournal as a teenager. I enjoy writing, and I wanted an outlet, so here we go. I also love photography, so you can look forward to some of that as well.

So, if you'd like to join me in my journey, welcome! To start off, I'm going to post some old stuff until I think of something really good. And I think my livejournal is going to officially retire.
Posted by Naomi at 8:20 PM No comments: